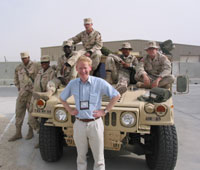 Tim Ripley has been writing on defence issues since 1990, for a wide range of British and international publications. He has reported from conflict zones in the Balkans and Middle East, as well as major defence and aerospace industry exhibitions around the world. Recent assignments include the conflicts in Afghanistan, Iraq, Qatar, Bahrain, Kuwait Croatia, Bosnia, Kosovo and Macedonia, the Farnborough, Paris, Dubai and Singapore Airshows, NATO Headquarters in Brussels, The Hague war crimes tribunal and the Pentagon in Washington DC.

He is a prolific author of books on military and defence subjects. Recent titles have covered modern conflicts, historical subjects and military technology.

Patton Unleashed (Brown Reference Group) chronicles the relentless advance across France by the US Third Army led by the famous General George Patton was published in 2003.

Air War Iraq (Pen & Sword), which profiles the role of air power in the US-led invasion of Iraq was published in 2003.